This time last week I was in a stranger’s house with 8 or 9 other strangers filling my face with some delicious vegetarian grub, cocktails and shots of Jim Beam…. courtesy of Iain aka The Drunken Butcher and The University of Manchester Foodies Group, this was my first supper club:

First up was our complimentary cocktail; a Martini complete with green olive. Whilst we got to know each other and waited for the rest of the group to arrive Iain (@drunkenbutcher) would keep us up to date with what he was doing and answer any questions we had. It was interesting to hear about his life and how he had ended up doing these supper clubs – mainly because I would love to see myself doing them one day.

We watched Iain prepare the veg for the celery and celeriac soup and were given various tips; from where to buy the best knives to hints on preparing celery for a salad. His ability to multi-task was impressive as he juggled sautéing the base for the soup, with boiling pasta, with chopping peppers and god knows what else was going on in the kitchen.

The food was served as it was ready – no real set course pattern. Each dish was put in the middle of the table and we served ourselves, I think this is always the best way to do it and as Iain reminded us, this was a supper club – not fine dining.

First we had macaroni cheese – the cheese sauce was made with soft cream cheese rather than lots of hard cheddar which meant it stayed lovely and saucy rather than setting solid. The topping was made with a mix of grated cheddar and breadcrumbs. To add further flavour and texture and to cut through the rich cheese sauce it was served with softened red peppers and chillies (initially Iain meant to stir this through but forgot so it was served on the side – this kind of added to the charm of the night). Needless to say the whole dish was delicious – so creamy and indulgent! 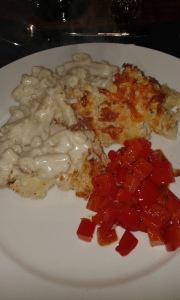 Next up was mushroom risotto. Iain is lucky enough to be married to a Finn (I think?!) and shortly after we arrived he presented the hoards of wild mushrooms which his mother-in-law had recently sent over from the forests near her home. Together with some regular button mushrooms they made a flavourful risotto which was enhanced with the ‘stock’ from soaking the wild mushrooms. Celery tops were chopped and stirred in at the last minute to add a hint of freshness too. 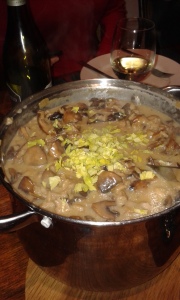 Last of the savoury dishes was the celery and celeriac soup, I’d never had celeriac that I could remember but it was really tasty even though my stomach was already about to burst at this point. Chunky croutons topped with parmesan added a nice crunch. 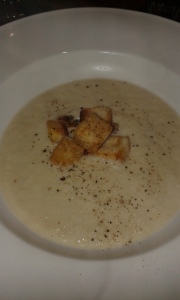 All the while we were eating Iain would keep us updated with what was going on in the kitchen. He often came and took a general vote of our preferences too so that he could tailor the meal, ‘do you want the brownie really gooey or more cakey’ – of course we said gooey! And although the price of the ticket (£25) only included the cocktail at the start of the night, Iain regularly offered us a beer or a shot of his favourite, Jim Beam. I declined on the beer but couldn’t resist a couple of shots!

After a little break pudding was served – chocolate brownie with cherries and peanuts served with an orange sorbet and a Jim Beam custard. The brownie was, as promised, soft and gooey. The addition of peanuts and cherries was a great idea too. The sorbet was refreshing and the custard was sweet and caramelly from the bourbon. 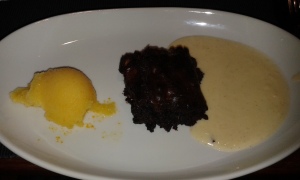 By the end I was painfully full! We had been advised to bring Tupperware, I think we all forgot, but if we had there would have been plenty to take home.

Overall for my first supper club I thoroughly enjoyed it. The food was delicious and it was nice to meet some fellow foodies. I think next time I’d like to go on a weekend night when it might be more of a party atmosphere. I was also left feeling very un-vegan! Iain is actually doing a vegan night tonight so I think next time there’s a vegan one I’d love to try that!

So despite his name, The Drunken Butcher really can cook a vegetarian feast and I would definitely recommend his Supper Club to anyone looking for some good cooking and excellent grub.

To find out more about The Drunken Butcher and his upcoming events find his website here http://thedrunkenbutcher.co.uk/